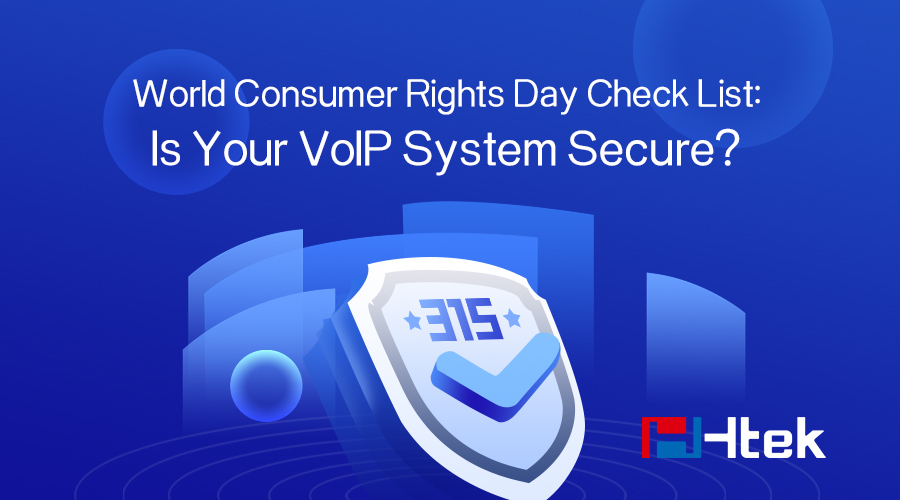 On the occasion of this year’s World Consumer Rights Day, the digital finance industry has become the focus.
Relying on the wide application of digital technologies, many aspects including payment method, loan process, insurance handling, wealth management, etc. have been reshaped, and all walks of life led by the financial service industry developed rapidly. However, in recent years and exacerbated by the COVID-19 pandemic, frauds, phishing, data malpractices and other cybercrime cases have erupted at an unprecedented growth rate. Is your VoIP network secure?

Why is VoIP Security Important?

First of all, after years of development, VoIP communication has won the recognition of many enterprises for its excellent HD voice call quality, competitive installation and maintenance costs, flexible scalability, and a variety of efficient office functions. Switching to VoIP communication is the general trend.

By 2025, 60% of organizations will use cybersecurity risk as a primary determinant in conducting third-party transactions and business engagements.

According to the above prediction from Garter, network security will obviously become one of the most important competitive advantages of enterprises.

However, due to the dependence on Internet connection, VoIP communication is vulnerable to many cybersecurity risks similar to those faced by computers. Among them, malware, payment fraud, and data breaches topped enterprise managers’ worries.
With the increase of users, VoIP cybercrimes are becoming more and more rampant.
IBM reported that the average cost of a breach in the United States had reached $8.1 million in 2019.

What are the Common VoIP Security Risks?

Malware: Malware and viruses can be targeted at any device connected to the Internet. Similarly, VOIP systems may also be subject to such attacks, which may slow down the access speed or even crash enterprise servers.

VoIP phishing: Criminals use the characteristics of VoIP to tamper with the Caller ID to make it similar to the number of certain reputable organizations or enterprises such as banks and state institutions, to dupe the callee to provide valuable personal privacy or company sensitive data.

Eavesdropping: When the VoIP system is set up on the unencrypted Wi-Fi network, criminals can easily eavesdrop on the dialogue, and use the obtained sensitive data of enterprise users and customers to carry out extortion, private information trading, etc.

How to Improve VoIP Security?

Use VPN to Guard Remote Work
Since the outbreak of the pandemic, more than 82% of company leaders have allowed employees to work remotely. However, if these employees who work remotely communicate with colleagues or customers through their own phones, the possibility of being attacked by VoIP hackers will be greatly increased, because the call is initiated in a non-enterprise network that is very likely to have security vulnerabilities.

However, by encrypting these calls using a virtual private network (VPN), you can make hacking impossible. After deploying Htek IP phones supporting open VPN, even in the remote working state, the devices can establish a safe and reliable connection with the company’s communication system, and the call is carried out in the company’s secure network, rather than other networks that may have vulnerabilities.

Higher Version TLS 1.3 and SRTP Lock Call Data
TLS (Transport Layer Security) often is used alongside SRTP (Secure Real-time Transport Protocol).
In a normal call, TLS encrypts the signaling of the calls, and SRTP secures the actual media – the “data packets” running over the highway set up by the signaling.

Since its initial launch in 1999, the lower version of TLS has exposed more and more security vulnerabilities. In 2018, the latest TLS 1.3 came out, and Htek quickly released the latest firmware version supporting it.

Compared with earlier versions, TLS 1.3 has faster handshakes, simpler and secure cipher suite, and zero round trip time (0-RTT) key exchange. In a typical call, the handshake time of TLS 1.3 is about 33% higher than that of TLS 1.2. In addition, TLS 1.3 removes all static key exchanges and ensures forward security, that is, even if there is a network attack in the future, the historical call data will not be threatened. Supporting TLS 1.3 means that the transmission speed and data confidentiality of encrypted calls have been greatly improved.

On the other hand, SRTP is an extension profile of RTP (Real-Time Transport Protocol) adding further security features, such as authentication and encryption, which can minimize the risks of attacks such as denial of service.
Through supporting TLS 1.3 and SRTP, Htek IP phones can deliver smooth call experiences and reliable security.

Monitor phones’ calls and access data, and update the phones regularly
Enterprise communication records can be used not only for business analysis, but also for preventing security risks.
Managers continuously monitor the date and length of enterprise calls, the numbers of calls to certain IDs, etc. When unusual data appears, it may mean the intrusion of hackers. Taking corresponding protective measures in time can avoid major losses. When users log in to the home page of the Htek Device Management System (HDMS), there is a data analysis pie chart, which can intuitively show the status of all your phones.

In addition, timely upgrading to the latest firmware version regularly released by VoIP suppliers is very effective to deal with emerging security vulnerabilities. It seems troublesome to update every device regularly. In fact, regular and batch updates of devices can be easily realized through the Htek Device Management System (HDMS).

Install Redundancy Serves of VoIP Network
If the pandemic has taught us anything, it is to be better prepared. Establishing a sound redundancy mechanism before the unexpected news can effectively reduce the impact and loss.
Consider redundant servers when designing VoIP solutions. Even if the main service suddenly breaks down, redundant servers can quickly take overworking. The latest firmware version of Htek improves the switching function between the main and standby servers, and the whole switching process has no impact on the call service.

Cybercrime is a rapidly growing issue, enterprise managers should evolve to match the speed of evolution of cyberthreats. An effective defense requires not only reliable VoIP devices, but also comprehensive security strategies.

About Htek Htek is a world-class designer and manufacturer of enterprise IP phones and gateways. Since 2005, Htek (aka Hanlong Technology) has provided customers in over 90 countries worldwide with high-quality VoIP products. Htek’s UC900U series IP phones continue the tradition by focusing on cutting-edge features, broad SIP compatibility, great value, and an industry-leading warranty. Htek distributes its products via channel partners, and custom designs and rebrands products for large partners such as ITSPs. Nanjing Hanlong Technology Co., Ltd. is a private company headquartered in Nanjing, China, with offices in LATAM, North America and Europe. Visit us at http://www.htek.com/